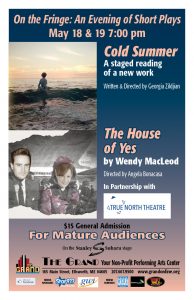 The House of Yes by Wendy MacLeod

True North Theatre partnered with the Grand Theatre in Ellsworth for an evening of adult themed theatre.  In conjunction with “Cold Summer,” an original piece by Maine playwright Georgia Zildjian, The House of Yes  was one of the foundations for the “On The Fringe” event.

It’s Thanksgiving, and Marty’s arrival home is greatly anticipated by his mother, Mrs. Pascal, his twin sister, Jackie-O, and his younger brother, Anthony. He arrives during a hurricane, but worse than the storm is the fact that Marty brings Lesly, his fiancée. This ruins everything. Marty’s engagement is a threat to the well-being of this family and a greater threat to Jackie-O, who has always wanted her brother for herself.

“In Wendy MacLeod’s obsidian-black comedy, The Pascals, for whom the clock stopped with the Kennedy assasination, are shut in as a Thankgiving hurricane swirls outside. Arriving ahead of the storm’s eye are Jackie-O’s twin brother, Marty and his fiancee Lesly. The obsessive Jackie is keen to renew her long-running incestuous affair with Marty, which is fine by the mother, who’s still lamenting her husband’s desertion, and by puppyish younger brother Anthony who immediately desires Lesly. The resulting battle over Marty becomes something of a class struggle between the Pascals’ poetic insanity and Lesly’s plebian pragmatism.” –Steven Mikulan, LA Weekly.
The cast included Jasmine Ireland (Jackie-O), Tyler Costigan (Marty), Amy Moran (Mrs. Pascal), Garrett Moyer (Anthony)  and Aimee Gerow (Lesley).  The production was directed by Angela Bonacasa, with Set Concept by Tricia Hobbs, Lighting Design by Scout Hough, and Stage Management by Mary Clark.